Twelve months ago it seemed inevitable that Bashar Al-Assad had no future in Syria, that it was merely a matter of time before his reign – and his dynasty – came to an end.  What has been consistent also, however, is that there has been no clarity in terms of who should replace him.  Furthermore, this has never been an internalised, isolated civil war; it is regional, strategic, and symbolic. END_OF_DOCUMENT_TOKEN_TO_BE_REPLACED

In order to understand why legitimacy is important, we should consider what happens when it disappears.  We need to consider this in respect of both internal and external legitimacy.  External legitimacy is perhaps easier to consider, as there are so many well documented examples, and because the legitimating forces are clear and easily measurable; when the international community describes a country as a failed state, it is primarily in relation to its external legitimacy.  Sanctions are usually the first indicator.  The International Community decides, in its wisdom, that due to some breach in the rules – formal or otherwise – a State, and in particular its régime, needs to alter its behaviour in order to be considered persona grata.  The State becomes isolated, trade opportunities become limited, and economic progress is retarded.  This happened in Iraq, Iran, Afghanistan, North Korea, Syria, Somalia – the list goes on.

END_OF_DOCUMENT_TOKEN_TO_BE_REPLACED 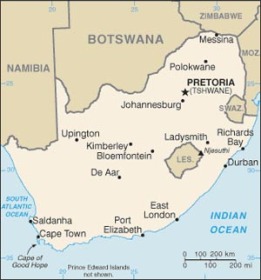 South Africa is a country of almost 50m people, rebuilding itself.  It has serious challenges with crime, and corruption, but it is doing much better than any other country in Africa.  Like so many African countries, it is extremely rich in natural resources; as we flew into Johannesburg, the South African in the seat beside me pointed out the point in the high veld where at least 80% of the world’s platinum is buried.  The uranium is further south, and gold and diamonds are everywhere.

For all that, my security briefings were frequent and stark.  Johannesburg is not a safe city.  Don’t drive anywhere.  Don’t go for a walk.  And so on and so forth.  Nairobi – coming later this week – was admittedly reported as being more dangerous, but South Africa has its issues.  One of my colleagues was “held up” as he describes it last year – thieves with guns and cable ties broke into his house, tied him and his partner up, and pushed the nose of the gun into the backs of their heads demanding money and valuables.  It lasted for an hour, and it’s not unusual.  Thankfully neither of them were hurt.

In 2010, South Africa successfully hosted the Soccer World Cup.  It was a significant investment for the country, but an important statement to the world – the New South Africa has arrived!  The Rugby World Cup in 1995 was more of a symbolic statement, coming so soon after the ending of Apartheid, and didn’t have the same caché as hosting the soccer equivalent (it was, after all, only the third time the Rugby World Cup was held at all!).

There are internal and external factors in calculating legitimacy.  For South Africa, its crime rate, and by extension the capacity of the government to secure its citizens, impacts negatively.  Similarly, corruption, and the extent to which it impacts on individual freedom to trade, establish businesses, and generally engage in commerce, is a negative.  These are both internal factors.  The extent to which the infrastructure of the state is recognised as legitimate by the international community – locally, regionally, and globally – is important.  States need both.  Syria’s Al-Assad maintains a tenuous grip on legitimacy internally – it would appear that a significant minority oppose him within Syria, but he retains control over the military.  Externally, he retains strong support from Russia and China in particular, which is sufficient to maintain a non-interventionist policy in the UN, a position that frankly suits the US in all likelihood.  Hilary Clinton declared recently that Al-Assad had lost his legitimacy.  But of course he hasn’t – not yet, in any case.

Back here in South Africa, there are large swathes of the population who are disenfranchised, who by extension offer no support for the legitimacy of the state (which does nothing for them anyway).  Queuing for passport control this morning with hundreds of passengers who had flown in from Europe, I noticed that the vast, vast majority of those queuing with South African passports were white.  Generally speaking, the wealth remains very unequally distributed.  But the state itself retains its integrity, it remains better than what went before.  Still, twenty years on, there are voters now in South Africa who were born after the end of apartheid, and who will be demanding more.