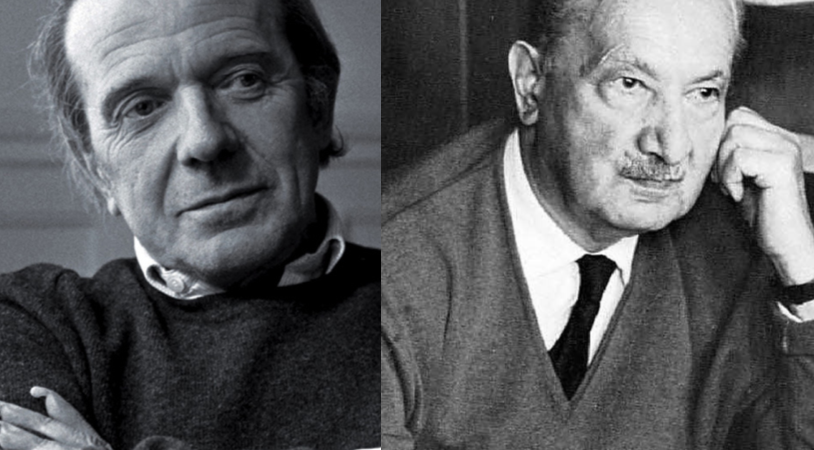 The recent BBC revisiting of the history of art – Civilisations – is fascinating for its juxtaposition against the 1969 predecessor by Kenneth Clark. The new version tries to be genuinely global, post-imperial, and generally woke, so to speak. However, it doesn’t quite get to the philosophy of the creative act, the artistic imperative. The series grapples with consequences and politics, with religion and hierarchy, but not really with any philosophy of art, or questions of meaning. The interpretations of Martin Heidegger and Gilles Deleuzes, while diametrically opposed in some ways, are illuminating on the subject.

Heidegger’s view (specifically on Modern Art) was that it was essentially destructive. In a 1956 Der Spiegel interview, published after his death ten years later, he argued that just as philosophers could not prescribe a new condition for humanity to confront modernity, art had no suitable perspective from which to contribute. Art in essence, as I read his comments, compounded the inherent entrapment of the modern, further distancing us from our essence, or being.

END_OF_DOCUMENT_TOKEN_TO_BE_REPLACED

I finally did the TEDx talk at Ballyroan Library a few weeks ago, and the video has just been published. As I’ve considered the impact of technology on politics generally, and AI on society more specifically, it seems to me that the most significant impact is on meaning, and understanding, on our systems of knowledge and epistemology. This crystallised somewhat in the talk. It was necessary for the format to simplify the ideas somewhat. I think at least in part that worked.

Later this week I’m speaking to the UCC conference on Eco-cosmology, Sustainability and a Spirit of Resilience, on the subject of ‘Machine Generated Illusions of Intimacy’, about the challenges of modernity and computational epistemology. Here’s a sneak peak.

The fifth Economy and Society Summer School this week was an immersion in critique, ecology and theology, and this is a quick summary. Held in the wonderful surroundings of Blackwater Castle, and adorned in splendid sunlight for the duration, my own interests in politics and technology found good company and themes that illuminated my research. Organised by Dr Tom Boland and Dr Ray Griffin, it is becoming an important resource for students of sociology and culture in Ireland and beyond. While for me there are new avenues and new subjects to investigate, it has nevertheless begun to reveal a direction for a more extended research. END_OF_DOCUMENT_TOKEN_TO_BE_REPLACED

The international system is a complex and convoluted thing, and sets the framework against which States are measured for their effectiveness, righteousness, or other measures that could serve as proxies for legitimacy: transparency, robustness, even happiness, or goodness. According to these indices, Ireland performs reasonably well – very well actually. It is the seventh most ‘unfragile’ country in the world; the eleventh most ‘good’; the 18th most transparent; and the 19th happiest. Most of these indices combine different metrics such as GDP, social metrics like unemployment, education rates, and so on, which tend to mean that Ireland – and other countries – won’t deviate too much from one ranking to the next. So Ireland performs well as a country. However, the combination of the EU Crisis, Brexit, and Trump’s America seem to represent a trifecta of bad things over which Ireland has little or no control, and could send the country hurtling down those indices. So if Ireland has so little control over these shaping factors, is Ireland in fact a legitimate country, a genuinely sovereign power?

END_OF_DOCUMENT_TOKEN_TO_BE_REPLACED

I had the privilege to participate in a workshop on algorithmic governance this past Friday at my alma mater, the National University of Ireland, Galway, under the supervision of Dr Rónán Kennedy and Dr John Danaher of the Law Faculty. and co-funded by the Colleges of Business and Public Policy. It’s part of a wider program of research grandly titled ‘Algocracy and the Transhumanist Project‘, which promises to tread some fascinating pathways. Comprehensive synopses of the event have already been published by Dr Danaher and one of the speakers Dr Muki Haklay, so I won’t re-do their work, but instead refer to one of the particularly interesting themes that emerged from the work.

END_OF_DOCUMENT_TOKEN_TO_BE_REPLACED

Interesting pickup in the Guardian yesterday on how the British defense mandarins plan to ‘sell’ war. It’s not as easy as a hashtag…

The New York Times and the Guardian have been digging ever deeper into the activities of the US National Security Agency or NSA following the leaking by Edward Snowdon of information about how they were spying both on countries and ordinary people at home.  Hot on the heels of the Chelsea Manning and Wikileaks diplomatic cables episode, there has been a constant flow of stories reporting on nefarious activities of spooks and governments, embarrassing opinions, and the mechanisms by which international diplomacy and spying are conducted, though Wired Magazine had got there first.   There are numerous angles to all of this.  There is the technology problem, an Orwellian, Kurtzweilian post-humanist dystopia where technology trumps all, and big data and analytics undermines or redefines the essence of who we are and forces a kind of a re-evaluation of existence.  There is the human rights problem, the balancing of the right to privacy and – generally speaking – an avoidance of judgement of the individual by the state, with the obligation to secure the state.  This issue is complex – if for example we have an ability to know, to predict, to foretell that people are going to do bad things, but we choose not to do that because it would require predicting also which people were going to do not-bad things, and therefore invade their privacy, is that wrong?  Many people said after 9/11 ‘why didn’t we see this coming?’ Which leads to the question – if you could know all that was coming, would you want to know?

END_OF_DOCUMENT_TOKEN_TO_BE_REPLACED

Six months ago, it appeared obvious that Bashar Al-Assad was on his way out of Syria.  What was less clear, however, was who was likely to succeed him. And it is this particular point – the absence of a clear opposition – that has kept him in place. The various countries that have an interest are both local and global, and the rationale of each bears thinking about.

Let’s start with the neighbours.  Immediately surrounding Syria are Turkey, Iraq, Jordan, Lebanon and Israel.  Hizbollah – and therefore Lebanon – is supporting Assad, primarily one suspects because they think he will win. Syria has long been a friend of the Palestinians.  Assad himself put it thus in 2002: “As far as an occupier is concerned, there is no distinction between soldiers and civilians… There is a distinction between armed and unarmed, but in Israel everyone is armed. In any case, we adopted the following concept: resistance to occupation is a legitimate right.”