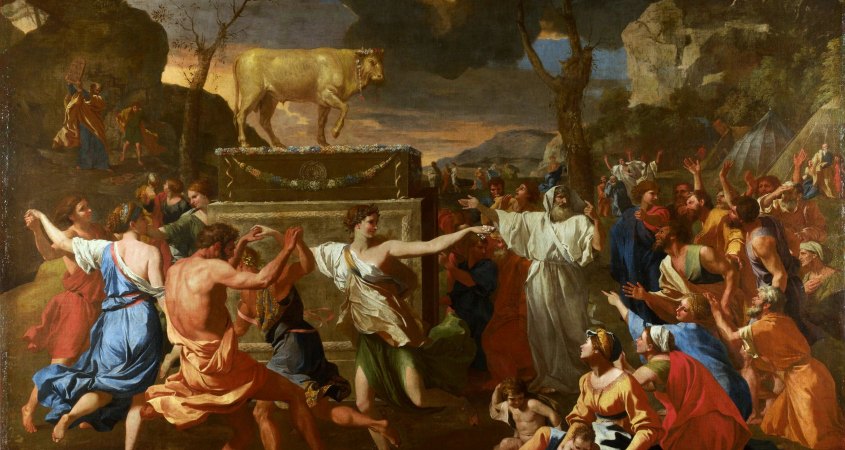 When Moses went up Mount Sinai to get the Ten Commandments (Exodus, Ch. 19 ff.), he took a bit longer than expected. The people, concerned that Moses might not actually come back, decided to make their own God to worship, and created a golden calf, from the assorted gold of the people there gathered. ‘These are they Gods, O Israel, that have brought thee out of the land of Egypt,’ said Aaron, and by all accounts they had something of a party to celebrate. The story always made me think about the utility of the calf; it was very expensive. The economic cost of the thing was immense. And while the yield – being metaphysical – was literally incalculable (what price redemption and/or salvation!), surely there were cheaper ways to fashion a God? What about a nice painted papier-maché calf? That would have looked just as good.

Let’s say for the sake of argument that there were a thousand people there, and each had ten units of value. If half of those units of value were offered up to the communal icon building exercise, then the collective wealth of the group was now reduced by half. That value has now – for all earthly purposes – vanished. It’s gone. It can be recovered, but biblical wrath would surely follow. A lot of effort went into creating that calf, it had better be worth it.

Now consider the wealthy family paying forty thousand dollars to fly first class from London to New York. This family has a lot of money. Let’s say it’s $100m. They could do this a hundred times, and still have $96m left. So they don’t really care. If asked about their conscience, they might say something to the effect of ‘trickle down economics’. The logic runs something like this: of the forty thousand dollars, some contributes to the cost of the flight – along with the other two-hundred-odd people on the plane, they’re all contributing in a relative way to the fuel, the cost of airplane maintenance, the cost of security, the cost of airport services, luggage handling, food, flight attendants, pilots, rights for on-demand entertainment channels, and so on. The total cost of that will still, however, be less than the total cost of the tickets.

This rich family have paid more than their share, in order to get the nice plush seats at the front of the plane. The moral rationale remains that the balance of their ticket price will find its way into the pockets of other people less fortunate, by being distributed through the corporate system into other workers’ pockets, sometimes as sub-contractors, perhaps as wages, perhaps as services in kind, perhaps as government services funded by corporation tax receipts. That’s trickle-down economics.

Let’s say there are another two hundred people on the plane, each of whom has paid $1,000 each for their ticket. That’s a total of $240,000 for the flight. Let’s say each flight like this costs the airline company $200,000 for everything, including a contribution towards company overheads like marketing, CEO bonuses and so on. This means that the company will make $40,000 profit on this flight. Where does that money go?

Increasingly, the money is beginning to accumulate into funds, high net worth individuals, and ‘off-shore instruments’ that protect that money. A larger and larger portion of the world’s GDP – around 10%, or $7 trillion according to the IMF – is held ‘offshore’. It is too much money to spend, and so it sits there, slowly – very slowly – being chipped away at by agents, bankers, insurance salesmen and other financial intermediaries tasked with maintaining the advantages of the elite.

It represents incredible waste. The money fails to trickle down, but remains suspended in untouchable isolation, a golden calf for the twenty-first century. We dare not touch it – last the wrath of our modern day secular theology be loosed upon us. This is the central suggestion of an upcoming book by Eugene McCarraher, called The Enchantments of Mammon. Having not yet seen the book, I would anticipate that it follows on the work of Carl Schmitt and Giorrio Agamben, and the concept of secular theologies that have so dominated the later twentieth century. ‘Far from displacing religions, as has been supposed,’ the blurb puts it, ‘capitalism became one, with money as its deity.’ We shall see!