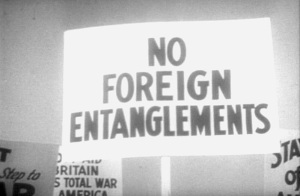 In the early part of the twentieth century, Woodrow Wilson‘s America decided upon an Isolationist Foreign Policy concentrating their efforts on the battles at home. It wasn’t a new strategy – since the days of George Washington, the country as it emerged tried to distance itself from foreign entanglements, notwithstanding repeated encroachment on its borders by regional competitors and the death throes of European Power. The German ascendancy in the Atlantic finally forced their hand, and in order to protect the interests of America the country was forced into the war, and away from its isolationism. America, it appeared, could only advance her domestic interests if actively engaged on the International Stage.