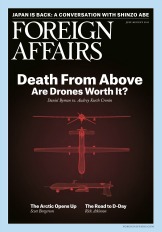 Dan Byman’s defence of drones in Foreign Affairs (July / August 2013) sets out the case for drones, a highly effective, low risk method of taking out terrorists.  The changed nature of terrorism, with its globalised, stateless, and highly distributed character certainly presents significant challenges to the defence of the realm.  There are advantages over conventional military options – air strikes, ‘boots on the ground’, covert operations – and, in particular, the speed with which weaponised drones can be deployed makes them far more flexible tools for the military.  The politics, Byman adds, can be tricky, but most governments within drone strike domains are tacitly acquiescent.

If the objective of the exercise is to defeat terrorism, or, rather, the immediate threat of terrorism, then Byman is right – drones are extremely effective.  However, he is wrong in not addressing whether they advance the long term strategic interests of the United States. He limits his discussion on this to the prospect that drones create more terrorists in people whose families are killed or injured, perpetuating the hatred that turns people against America.  The problems are deeper than that – and impact the core of who and what America is.

In the first instance, drone strikes subvert due process and the rule of law, as happened in Guantanamo Bay.  The people who are the subjects of the military operations have different standards of justice applied because of the judgement of military intelligence, a historically unreliable and often incredible source.  Once a ‘target’ is designated a ‘bad guy’, he is denied the right to life.  There is no accountability for the action – getting the wrong guy, being slightly off with the intelligence, none of that is possible, nor cared about once the target has been eliminated.  There is an implicit sense that no matter what happens, killing a suspected bad guy can’t increase the risk of terrorism.  The bad guy has no advocate.

It should be noted that the administration of justice of any kind outside the territory of the country is extraordinary in and of itself; the power of the state is no longer confined to its territory or indeed to its citizens.  Technically, this is less about the administration of justice and more about national defence, and the right to self-defence.  However, as most drone strikes appear pre-emptive (or indeed retributive) and not expressly defensive, we find ourselves in yet another grey area brought upon us by globalization and technology.

This doesn’t just circumvent due process for the target, but it creates an intolerable double standard in the criminal justice system.  There are now different kinds of people.  While there is one class of person – an American who does not threaten national security, and anyone else (including Americans) who do.  There are no human rights, but non-combatant rights versus enemy (or unlawful) combatant rights.  Substantially, in addition, this equates to enemy combatants not on American soil; for some reason, there is a sense that, once ‘landed’, enemy combatants somehow become subject to non-combatant legal process; hence the reluctance to bring Guantanamo detainees ashore, and the government setting its face against the use of drones on American soil.  Each then is held to a different standard.

The Boston Marathon bombings raised the question as to whether the suspect Dzhohan Tsarnaev, a US citizen, on US soil, could be designated an enemy combatant.  Even before that, US courts had been gradually broadening the definition of terrorism (as we have talked about before), and stretching it to become quite broad.  There seems to have been no check.  Still, resistance has been firm, and so-called domestic terrorists remain treated in the civilian justice system – for now.

The arguments are different in each case, and important.  In the Morales case, where the prosecution wanted to classify a crime as terrorism, the motivation was punishment; agreeing such a classification would warrant far harsher punishment than ‘common’ homicide.  In the Tsarnaev case, Republicans advocating for enemy combatant status wanted to see Tsarnaev interrogated aggressively, in the same manner as would have happened to combatants lifted from the Afghan battlefield and spirited away to Guantanamo Bay.  In essence, Republicans wanted to see Tsarnaev denied his constitutional rights because he was in some way different.  They didn’t get their way; the danger is that, had his name been Smith, or – say – McVeigh, they may not even have asked.

On the one hand we have an unacceptable level of uncertainty over how to define terrorism, as we spoke about in this piece.  That sets a new threshold for criminality, which is OK – people seem to be intent on doing a lot of really bad things these days, for which there should probably be some elevated deterrent or punishment.  But it should be codified or defined better.  On the other hand, we have a separate order or rights, into which some people are placed, and others are not, based on indeterminate criteria. In actual fact, there are no rights for enemy combatants.  There is only the unchecked will of the State, with all of its awesome power, imposed on a non-national, outside the territory of the State.

There is a new standard created in warfare also.  This is invasion without invading.  This is invasion without taking territory, without compromising the territorial integrity of the foreign country.  It is about people, not land or resources; the laws of war don’t understand this language.  These are significant changes.  The Laws of War, and the conventions (small ‘c’) that have guided our thinking in the development of international relations are broken now.

Just as Ann Marie Slaughter in her excellent TED talk spoke about networks, not nations, that States don’t act as they used to, the integrity of the state, its power, resources and influences, are no longer fixed, but fluid.  Think about how the internet distributes resources – data, intelligence, secrets can all reside on or off-shore; how are our laws to guide them?  Think about how money flows freely between various corporate entities, avoiding taxes and finding the path of least resistance back to the investors and shareholders.  Even think about rivers – Ethiopia’s planned Nile dam threatens the economy of Egypt, just as the Tipaimukh Dam in India threatens the downstream ecosystems of Bangladesh.  These are all external forces impacting on the sovereignty, or control, of the people, resources and economies of States that do not compromise the territorial integrity of the State.  The sovereignty of the State, or sphere of legitimate control of the State, is on the one hand extended beyond the territorial boundaries of the state by technology.  On the other, it is being compromised within by influences from outside.

This changing, fluid model of sovereignty is clear in Afghanistan, or Iraq, or Yemen, for example, where American influence is very significant.  It is similarly evident from a cultural perspective (as well as economic and sometimes militarily) in the former colonies of France and Britain in their relationships with their former colonial masters.  Even in the US, the Mexican influence on California, or the Cuban influence on Florida, is not insignificant due to cultural migration; in those cases, the people have moved with their cultures, not merely into a foreign one.

But back to Dan Byman and the problem with drones.  The fundamental nature of the state is based on ideas, concepts, and beliefs.  America is about the American Dream, where anyone can make it, where any man or woman can become president, where everyone is equal.  Drone strikes, extrajudicial killings, and the subjugation of the other as somehow unequal, or undeserving of constitutional protection, attacks the very core of that idea.  That’s how America loses this war.  Not because it can’t get all the bad guys; America loses the war because it becomes the bad guy.